You Can Watch the Next Octagon-of-Horror Cage Match "Debate" ... or You Can Just Go Ahead and Kill Yourself 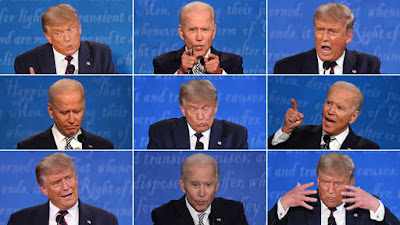 According to legend and lore, journalists are the type to rush to the scene of a car crash with the hope of interviewing the man splattered on the road before he draws his next breath (or before his or her competition at the newspaper or TV station arrives on the scene), or to knock on the door of some lady who just lost her baby in a fire, demanding to know how she FEELS. Cliches like "hard-bitten" and "world-weary" are tossed around; personally, I find "ruthless" and "heartless" more accurate.

I have been a working journalist, I am proud to say, for more than 30 years, but have never been one to enjoy visiting a nursing home that just exploded to count the dead old people scattered on the lawn. (Covering blazing nursing homes was just one of the luxuries of my first job out of j-school, at a local TV station. I left there after a couple of years, realizing it probably wasn't normal or healthy to require an entire bottle of bourbon to get to sleep after a day's work.) It's why I now write about relatively harmless stuff like the businesses of media and marketing — there are plenty of horrible monsters there, and god knows plenty of bad news, but very rarely is actual blood drawn, and living inside that world doesn't promote alcoholism or keep me up nights.

As a newsperson and a news junkie, I have always immersed myself in the events of the day, but find that as I grow older I prefer to keep a somewhat safe distance from life's blood and gore, while still making the effort to keep up with what's happening in a world in which I can't escape being a part. The way I see it, I have two options: obsessively follow the details of every sickening, deplorable event (not to mention the endless, largely pointless analysis of said events) in some mission to stay thoroughly informed, or jump off the Chrysler Building. That said, sometimes, try as I might, I simply cannot look away from the car fire.

That was me two nights ago, during the first presidential, um, debate. I knew what I was getting into ahead of time, but I went ahead, steeled myself, popped a big bowl of popcorn — and thought I could take it.

Boy was I wrong.

Just as I do not enjoy watching nursing home explosions or chatting up the mothers of dead babies, I cannot abide watching an unapologetic bully in action, in large part because I myself have been bullied, as an adolescent and in the work world. (Again, the media business is full of monsters, especially in New York. I hope to write about those, someday.) What a depressing spectacle and a true low point for our politics and discourse, that event — so much so that I couldn't bear to write about it till today, two days on, because it put me in such a hopeless, exhausting funk the entire day after. (I went to bed at 9 o'clock last night.)

I will not be writing about collapsing bridges, roller coasters full of school children leaving the rails or police shootings anytime soon, nor will I be watching any more of these televised, octagon-of-horror cage matches where millions of bored Americans gather around the warmth of their big-screen TVs to see a gargantuan toad pummel a sad puppy into bloody submission. I will read the "highlights" the following day, thank you.

What a shame, that this incontestably low point is what we've all come to. The Chrysler Building's not looking like such a bad option.