The Only Good Thing to Come Out of This Pandemic: The Befitting Failure of New York City's Hudson Yards 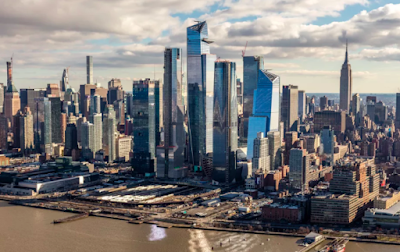 It's official: that gleaming monument to hubris known as Hudson Yards—the mega-development on the West Side that made Tenth Avenue unnavigable for years and ruined the Manhattan skyline with a bunch of ugly, dystopian towers, not to mention that rusting atrocity The Vessel—is a big fat $25 billion flop, as the Times reports. I'm sure similar, schadenfreude-stoked stories were written in the 1930s when the Empire State Building opened just in time for the Great Depression and sat half empty for years, but Hudson Yards is uniquely ill-timed, maybe even irredeemably cursed, as the pandemic has shuttered its marquee tenants (most notably Dallas import Neiman Marcus—as if the city didn't already have a surplus of homegrown retailers selling a bunch of overpriced stuff nobody can afford), while even that suicide-inviting, stairway-to-nowhere monstrosity that is its centerpiece has been mothballed. And the residents of the city are stuck with a hideous heap of hulking, deserted junk whose main purpose seems to be blocking the afternoon sun along the Hudson. Just think of what that $25 billion (and the many millions more in tax breaks and infrastructure projects devoted to the debacle) might've done to revamp New York's neighborhoods that are actually in need, or to help fight the virus that has devastated the city, or to provide affordable housing for working and middle class people who've been priced out of the borough. Meanwhile, don't worry about the developer, Steve Ross, and his merry band of capitalist thieves—they can always dry their tears with $100 bills and the eviction orders of all those widows and orphans.
at February 09, 2021