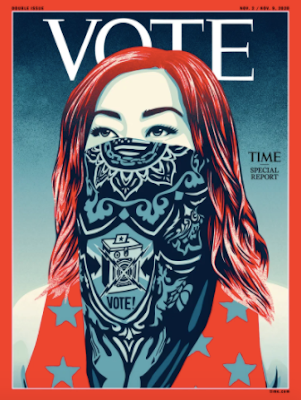 It's refreshing to know there's still a first time for things, especially things created by journalists.

In an unprecedented move, Time magazine has replaced its cover logo, instead urging readers in that familiar space and typeface to VOTE. The accompanying cover art, of a woman wearing a scarf to cover her nose and mouth, is by the estimable Shepard Fairey.

Time's editor in chief and CEO Edward Felsenthal explains the decision to change up the cover this week:

Few events will shape the world to come more than the result of the upcoming U.S. presidential election. ... To mark this historic moment, arguably as consequential a decision as any of us has ever made at the ballot box, we have for the first time in our nearly 100-year history replaced our logo on the cover of our U.S. edition with the imperative for all of us to exercise the right to vote. ... We stand at a rare moment, one that will separate history into before and after for generations. It is the kind of moment in which readers across the country and around the world have always turned to TIME. We thank you for doing so now.

The editor's note is followed by a discreet button for ordering a print issue of your very own — meaning they intend to take full advantage of monetizing this historic moment in presidential politics, and journalism. And you know what? Good for them. Journalism today, notably print journalism, depends on fresh ideas and financial health. Here's to more of both, no matter what comes to pass on November 3rd.

... And in another burst of creativity from the newsstand ...

The cover of New York magazine's October 26 issue will feature a series of peel-off "I Voted" stickers, in partnership with the organization I Am A Voter and created by an assemblage of 48 artists including Shepard Fairey, Barbara Kruger and Laurie Simmons. The magazine explained that millions of Americans are voting by mail, therefore missing out on those little adhesive testaments to doing their public duty typically handed out at the polls. There will be four different covers, each with 12 stickers — enough for readers to wear a different one daily through Election Day. Here's a sneak peek: 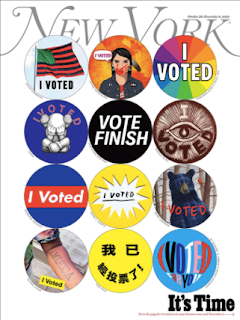