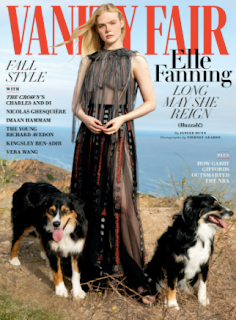 It's been awhile since I hated on Vanity Fair, so here I go again, shooting a dead, unimportant, uninteresting fish in a barrel. Remember when this magazine mattered, when we anxiously awaited each issue to see which A-list star had made the cover, at one time the most valuable piece of media real estate in Hollywood? While Fashionista dubs the October cover of VF featuring Elle Fanning a "must-read," others aren't convinced. Noting the well-mannered shot of Fanning posing by the seaside in a Dior gown with a couple of hoity-toity hounds, Roger Friedman of Showbiz 411 writes, "If you didn't know better, you'd swear it was Town & Country." He goes on to call the accompanying story "a nice People kind of cover, with no revelations." Of course it doesn't. Why should VF make news when it hasn't managed to do that in years under editor Radhika Jones? Even when Jones has tried to capture the zeitgeist — most recently, with last month's cover featuring an illustration of the late Breonna Taylor — she doesn't quite pull it off, well-meaning as she may be. (Hearst's O, The Oprah Magazine had already done a Taylor homage, and a better one, months before. Meanwhile, on social media, VF's cover provoked pushback about the media's "commoditization" of Taylor.) And yet one more cover down in this painful gallery of failure, we are left to wonder what this once-great magazine could've been had former Hollywood Reporter editor Janice Min been tapped to fill Graydon Carter's shoes instead of a book editor from the Times. Anna, are you listening?