The "Brand With Balls Award" Goes to Krispy Kreme 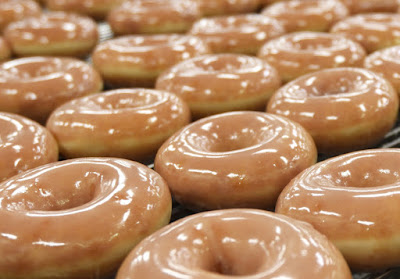 The award for the brand with the biggest balls of 2020 has to go to Krispy Kreme, which, even though Manhattan remains all but emptied because of COVID-19, still plans next week to open its flagship store in Times Square, normally one of the busiest neighborhoods in the world but where foot traffic is but one-tenth of what it was a year ago. (Although it should be pointed out that, even if it had wanted to pull out of the storefront, it probably couldn't have, as New York landlords have been particularly hard on retailers seeking to modify their leases during the pandemic. But, we'll still give 'em props for hanging in there.) There are features of the new Krispy Kreme store, as CNN reports, that we won't likely get to enjoy for some time — like the stadium seating in a giant doughnut box. And with the city still straining to get back to normal-ish, there probably won't be the once-anticipated mile-long lines around the corner on opening day, a phenomenon that, you may recall, greeted such Middle American chains as Chick-fil-A and Arby's when they swung open the doors of their first NYC outposts. But just think: a year from now, after we've all been vaccinated, the coronavirus is a distant, hideous memory and President Biden has reestablished the White House pandemic response team so we never find ourselves in quite this deep a pile again, we'll all be scarfing down those hot-off-the-conveyer-belt balls of sugary dough on our way over to a Broadway show. Ah, to dream ...
at September 11, 2020