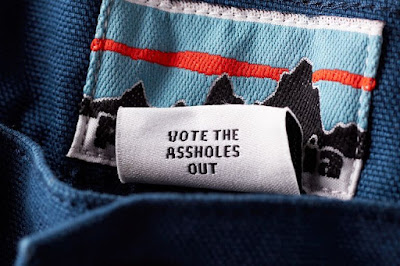 It's the kind of media attention money can't buy. Everybody's talking about Patagonia's hidden political message on the backside of a tag sewn into a pair of shorts, imploring customers to "Vote the Assholes Out." It's even become a trending topic on Twitter — what brand wouldn't want that kind of free advertising? Activism is, of course, nothing new for this popular marketer of outerwear, which has made headlines for giving a $10 million tax cut to environmental programs and for closing up shop on Election Day. Every news outlet from CNN to NBC, Yahoo, Vogue and People magazine carried approving stories on the company's clever clothing-tag stunt, but the conservative publication National Review was the sole news org I could find that put a spotlight on the lefty brand's surprising hypocrisy.

While it gets loads of press and the praise of devoted fans because of its p.c. bona fides, National Review reports that Patagonia also happens to be a longtime contractor for the U.S. Department of Defense, noting that the company has an entire team dedicated to furnishing our fighting men and women with cold-weather and combat uniforms. As the magazine's Jim Geraghty writes, "Most people will have no problem with Patagonia developing and selling [products to] the U.S. military. Then again, some of Patagonia's more stridently liberal customers, who see the U.S. military as an inherently imperialistic or destructive force, might not see the company's military contracts as a sin that they can excuse or forgive."

Count me among those stridently liberal customers, someone who happens to be a fan of Patagonia who proudly buys and wears its products, in no small part because I so admire its politics. As such, I say let Columbia or Marmot or Carhartt or The North Face supply our soldiers with their apparel. Now, nobody wants our soldiers to get frostbite, of course. And National Review's report makes a pretty broad leap in suggesting that if you're a liberal you're against the troops. (I am a liberal and I am not anti-military.) But strictly regarding brand equity and brand reputation, Patagonia has been far too successful building an image as a socially responsible company to risk pissing off its core customers. You cannot serve two masters, as the commandment goes. Finding out Patagonia is in bed with the Pentagon is like hearing Ben & Jerry's is the official ice cream of Fox News.

Here's the thing. I believe our armed forces deserve the very best supplies there are — I just don't believe such a famously progressive company with such a devoted following on the left should be doing the supplying.

Oh, and one more thing: Vote the Assholes Out.