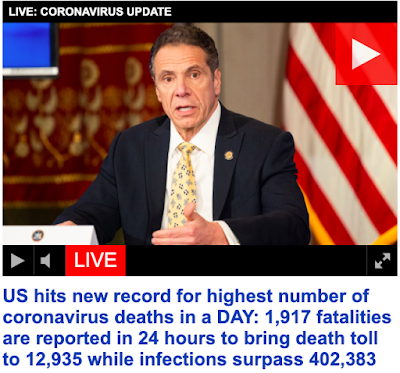 According to a poll just out from the Pew Research Center, 54% of Americans approve of the job the media are doing covering the coronavirus pandemic. That stat was the basis of the headline in The Hill.

But to me, here's the real news, and it's not good: the remaining 46% of survey respondents think we're doing a poor or only fair job.

This is no small survey, taking into account the opinions of 11,000 adults in March, as mass business closures, self-quarantining and social distancing were in full swing and as cable news ratings surged.

With so many of us consuming news content right now, what does it mean, then, that nearly half the public think we suck at our jobs?

It's a given that some of the content, especially on the part of the cable nets and the tabloids, has been alarmist and sensationalistic. (Want to raise your blood pressure? Just try perusing these headlines.) And we can certainly argue about the wisdom of consuming coronavirus coverage nonstop (a terrible idea, in my opinion, and for you fellow, less stable souls, enough to make a person want to take a swan dive off the top of a building). But by and large, I believe the content has been thorough, measured and reliable (with one obvious exception). And many pubs, including The New York Times, have made their coverage of the crisis free, even as evil bastard Rupert Murdoch's Wall Street Journal and others have kept theirs behind a paywall. Some publishers that initially offered their coverage gratis, like The Miami Herald, are now charging, saying they can no longer afford it.

There are fewer and fewer reporters to actually crank out that content, incidentally. Sadly, Poynter is keeping a running tally of the news orgs that have laid off or furloughed journalists because of the coronavirus. It is not a short list, and encompasses all media, not just newspapers, many of which were already struggling to survive even before the pandemic hit.

How can democracy survive in a country that doesn't value a free press and in an economic environment ambivalent about its demise?

Sucks being the messenger sometimes.
at April 08, 2020