Meatless Monday Through Friday? 'Food Supply Chain Is Breaking' Tyson Warns in Alarming Newspaper Ads That Happen to Appear Alongside Stories About Tyson

"Eat More Chicken" pleads the forlorn, sandwich board-wielding heifer in those familiar Chick-fil-A ads. Soon eating more of any kind of meat could be a problem if Tyson Foods' warning is correct. "The food supply chain is breaking," the meat producing giant cautioned in alarming, full-page ads in the Sunday editions of The Washington Post, The New York Times and the company's hometown paper, the Arkansas Democrat-Gazette, as the Post reports.

Tyson, which has been forced to shut down 13 plants amid the pandemic, argued in the ads that its facilities must stay open to protect the free flow of food (meaning, meat) to American households, even as it defends itself against not properly protecting its workforce from the coronavirus. The ad called on the government to help find ways "to allow our team members to work in safety without fear, panic or worry" — in an advertisement conspicuous for its tone of fear, panic and worry.

D.C. labor lawyer Jon Steingart took to Twitter to note the weird juxtaposition of the ad's placement in the Post alongside the jump of a page one story on the safety of workers at meat processing plants, notably those employed by Tyson Foods. 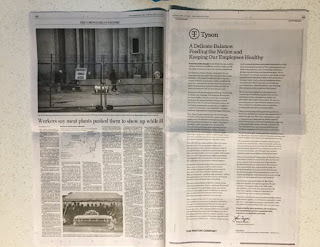 Understanding that newspapers are desperate for revenue, allowing for the deliberate placement of an ad directly related to a news article on the facing page is, depending on one's point of view, either a violation of journalistic purity or perfect ad-edit symmetry and the logical way to position the paid response of a subject refuting the claims made about said subject in that very story (I'm sure it's just a coincidence that it's a terrific moneymaking scheme).

It used to be that this sort of thing just wasn't done, that ads related in any way to editorial content were strictly forbidden to run adjacent to that content. Of course, anyone who's been paying attention knows such quaint rules have long since been shredded — just check for the many blurred lines between ad copy and edit copy in fashion magazines or for the countless content and event "partnerships" between news orgs and the companies they cover, supposedly aggressively and without bias. The point is, don't be surprised if you start seeing more industries defending themselves by way of such adjacencies. Lord knows newspapers need the cash and industrial titans have got plenty to defend.
at April 27, 2020