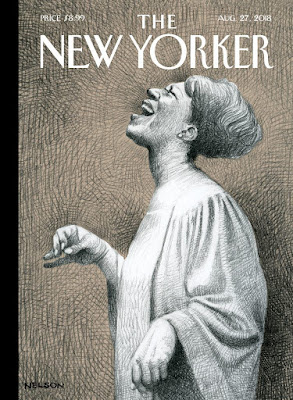 I couldn't help but notice the chorus of complaints across social media about The New Yorker's quick-turnaround tribute to Aretha Franklin—including more than a hundred comments on the magazine's own Facebook page. The common refrain: the illustration, by Kadir Nelson, simply does not look enough like its legendary subject. A sampling of the critics: "Nice thought, but it doesn't look like her." "Not crazy about this one." "The artist is not familiar with Aretha Franklin. Redo." "Worst Aretha portrait ever." "This neither looks nor feels like Aretha!!!" Maybe The Washington Post's excellent account by columnist and cartoonist Michael Cavna of how the cover happened and Nelson's explanation of his interpretation of the Queen of Soul (no quotation marks needed) will help observers to better appreciate its genius. Not only did the acclaimed Nelson (whose work hangs in the Smithsonian and who is responsible for some of the most beautiful, most memorable TNY covers) set out to reference Aretha's gospel roots, but he also got inspiration from this incredible 1957 ink drawing titled "Folksinger" by Charles White: 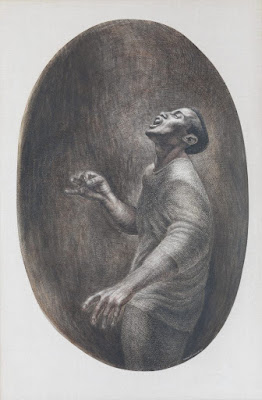 Was I myself familiar with the Charles White piece or Kadir Nelson's inspirations prior to coming across the Post story? No. Did I appreciate TNY's Aretha tribute all the more after learning about these things? Absolutely. There's no question that what an artist creates becomes more relatable to us when we understand the inspiration and stories behind the work. And we depend on journalists and trusted purveyors of journalism like the Post to see the value of publishing stories like this, thus illuminating the world and educating us all. I think most of the haters, after reading the Post piece, would have a different point of view about it — although I suspect that even after learning more about the artist's thinking, many would still have preferred something more on-the-nose (that is to say, obvious) and immediately relatable. How boring the world would be if that's how things actually were.
at August 18, 2018