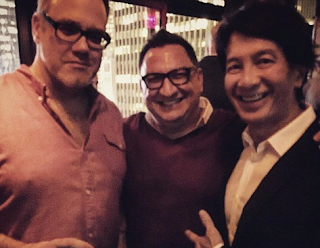 Bombshell news in the advertising world today that Ogilvy fired its widely revered global creative chief Tham Khai Meng over behavior it called "a clear breach of our company values and code of conduct" — his apparently becoming the latest in a growing line of agency bigwigs to get snagged up in the #MeToo mess, among them Droga5's Ted Royer, another onetime superstar CCO. Here I am, as it happens, posing with both men at an industry party during obviously happier times. The fact that I am beaming in the photo is not incidental. What a thrill to be flanked by two seriously accomplished, enviably talented ad guys. These sexual misconduct allegations are always troubling and infuriating, but especially so when the accused is someone you have known, written about and admired for years. Someone remarked the other day that, on Madison Avenue, in Hollywood and in other trades where the mighty have been swiftly brought down over alleged misdeeds, the stream of sexual misconduct scandals that dominated headlines not so long ago seems to have slowed to a drip — suggesting that maybe we'd heard the worst of the worst already. Today proved that there's still plenty of filth gushing from that spigot. Heroes, it would appear, are getting harder and harder to find, in advertising and elsewhere.
at July 11, 2018