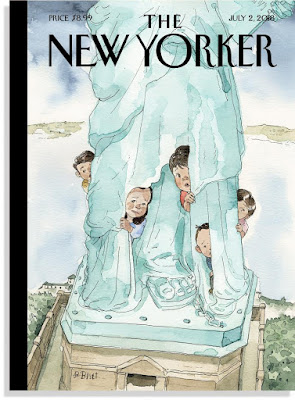 I think we've all seen enough of caged children on the U.S.-Mexico border the last few days. I know I have. I've never exactly been a journalist of the war-hardened, seen-it-all, trenchcoat-wearing type — I write about consumer brands and ad agencies and how they try to sell people stuff — but I have, as not only a reporter but as a human being who's hung around this mortal coil long enough, seen enough to have developed a reasonably hearty stomach when it comes to observing death and destruction and mankind's worst moments. But even I have struggled to watch this kids in fucking cages in America shit. What a low moment for this country, just when you thought it couldn't get any lower. But of course, I do watch, because remaining willfully ignorant is not an option for any person of conscience, especially under this regime. As Barry Blitt, whose illustration "Yearning to Breathe Free" covers next week's New Yorker, explains: "I can't watch TV news anymore. It's always people yelling at each other or, worse, people agreeing with each other. There's always a background drone of outrage, it seems. Stories like this, obviously, are different. The outrage and disgust is justified and real, and needs to be paid attention to." Well stated, Barry. (Oh, and by the way: Fuck Ann Coulter.)
at June 21, 2018