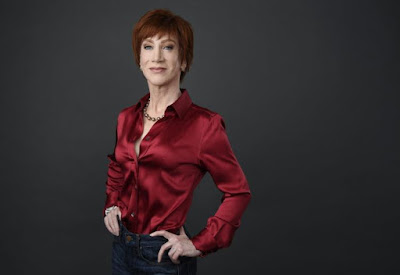 The fearless Kathy Griffin announced this morning on "The Howard Stern Show" that, after selling out Carnegie Hall in a single day, she is doing a second show in NYC, at Radio City Music Hall. (I've already got my tickets. How about you?) The Stern interview was entertaining, inspiring and informative — we learned that basically everybody in Hollywood turned their backs on Kathy after her Trump photo stunt, even (as we already knew) her supposedly close friend, former New Year's cohost, and embarrassment to journalism and gay men everywhere Anderson Cooper, and (as we just learned today, sadly) her onetime bestie Cher. (If you didn't catch the show this morning, find a way to listen to it after the fact on the SiriusXM app or YouTube or wherever. Listening to her talk the tweets she gets from Trump supporters — I won't spoil the fun here, but, oh boy — is alone worth the cost of a Sirius subscription.) Look, you are absolutely entitled to not like what Kathy did, or to think whatever you want about it, or to hate her guts. But the thing is, surely you agree that, in retrospect, considering what a shit show this administration has turned out to be, a celebrity photo shoot is pretty small potatoes. Understood, saying what you think does not always come without consequences, but I — and I'm not alone — don't think this woman deserved to have her life ruined over it. (I find it interesting that, on the topic of free speech, people like the CEO of Barilla pasta and the grand wizard or whatever he is of "Duck Dynasty" certainly never had to pay for their hateful homophobic comments. Donald Trump, who said the most vile things about President Obama, and encouraged even worse from his fans, was not subjected, as was Kathy, to an investigation by the Department of Justice but, rather, was rewarded with the presidency. And isn't it funny how the right demonized Roseanne Barr back in the day for her supposedly vulgar and disrespectful rendition of the national anthem at that baseball game, but now suddenly she's their poster girl, her show has been renewed by ABC and she's been praised by the president himself — all because the Roseanne the character and the person is a Trump supporter. Thinking about all the double standards are enough to make your head hurt.) The full-on assault Kathy Griffin has been subjected to — from the Hollywood "community," the media and the Trump administration, which apparently has nothing better to do than use the full powers of the U.S. government to torment a comedian — fits the very definition of the punishment not fitting the crime. But happily, just like the Dixie Chicks and others before her, she's coming back and is going to be bigger than ever. With everything else going on in the world, why am I ranting and raving about Kathy Griffin? I am a longtime fan and admirer, yes, but more importantly, I find the way she has been dragged through hell to be particularly ugly, unjust, egregious, infuriating, un-American — and familiar. Surely on some level all of us know what it feels like to be on the receiving end of, as Kathy would put it, a falling wall of shit. (I know I do.) As a journalist, I am supposed to remain neutral, but about Kathy Griffin I am and will always be totally and unapologetically biased. She is an American treasure, a heroine and a very funny lady. Do your patriotic duty and support her: http://kathygriffin.com.
at April 03, 2018