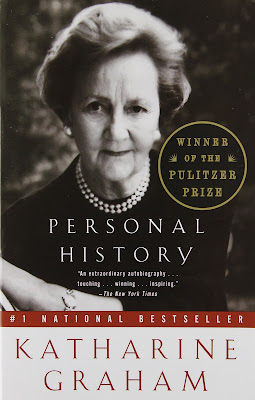 In his column today, the Times's Jim Rutenberg makes some excellent points about how Russiagate is different from Watergate—its central point being that the rise of the right-wing media has made it all that more difficult for actual facts to rise to the top. He won't get any argument from me on that. But it bears remembering that back in the 70s, despite the creation of Fox News still being decades into the future, there was a very real effort afoot, especially early on, to discredit The Washington Post as it peeled back the layers of Nixon's stinky onion, a fact that is underscored in the late Kay Graham's excellent, Pulitzer-winning autobiography, Personal History. The book is 20 years old now, but this Trump mess and its echoing of Watergate inspired me to revisit as an early-summer read what remains one of the best-written memoirs of a public figure I ever read—and its passages on the paper's takedown of Nixon are especially riveting, timely, and often prescient. Compare the current, unrelenting attacks on the press in the wake of FBI chief James Comey's firing with Graham's recounting of the daily shit that was being hurled at the Post—even following the infamous "Saturday Night Massacre"—and her increasing annoyance of it:

Yet the Post remained under attack—and the attack was becoming much more public. By this time I had warmed up to a degree of toughness of which I probably wouldn't have been capable the year before. ... For example, whereas earlier I might have been somewhat sympathetic with readers who wrote about the sharpness of Herblock's pen, in the later stages of Watergate I had no patience with those who complained he was being unfair to the president. To one scathing letter, I responded, "We have been heavily attacked for biased reporting by many individuals who, when confronted with the facts, have since resigned from the government." I wrote to a man in Florida on October 1973, facetiously thanking him for sending me a copy of an ad from the Miami paper suggesting that we belonged in jail and asking him, "If we are exaggerating minor peccadillos, why has the majority of the White House staff had to be unloaded?"

The Post was routinely accused of making a mountain out of a molehill throughout its Watergate coverage, much as the mainstream media is now being trashed by the conservative political machine over its reporting on Russiagate. (Newt Gingrich this weekend called for GOP leaders to "abolish" the Russia probe, suggesting that the heretofore universally respected Special Counsel Robert Mueller is now somehow biased and his investigation suddenly tainted. When Newt Gingrich starts trying to interfere, you know you're onto something.) Donald Trump and his fans, as we all saw, took to Twitter after Comey's testimony last week to declare the whole thing a "witch hunt" and the president himself vindicated. Seems like a good moment to consider Kay Graham's summation of Watergate:

Even today, some people think the whole thing was a minor peccadillo, the sort of thing engaged in by lots of politicians. I believe Watergate was an unprecedented effort to subvert the political process. It was a pervasive, indiscriminate use of power and authority from an administration with a passion for secrecy and deception and an astounding lack of regard for the normal constraints of democratic politics. To my mind, the whole thing was a very real perversion of the democratic system.