Move Over Pepsi: United Does a Nosedive

Don't worry—I'm not going to get all Jerry Seinfeld from the 90s and start ranting about the airlines. At this point, unfortunately, we've all become quite accustomed to the domestic carriers' crappy treatment of their passengers. Even JetBlue—the brand that, when it launched at the millennium, promised it would be different and which was, for a brief, blissful moment, as close to a pleasurable experience as one can get on an airplane these days—has gone the way of its more feeble brothers, squeezing rows in coach to within an inch of their life to make way for premium-class seating and nickel and diming us for checked bags and such.

But this business with United Airlines over the weekend—could it do anything more brazen toward murdering its own reputation and that of the whole industry?

You probably know the story by now—a doctor was forced to give up his seat to make way for a United employee, and when he (correctly) refused was pummeled and dragged off the plane, his fellow outraged passengers videoing the whole, shocking affair. If there's a god up there in those friendly skies, United will suffer a massive financial hit for this by way of a lawsuit.

But United should suffer even more—by losing the brand equity it has so carefully tried to build and the customers it's wooed with its slick marketing campaigns. (You'll recall that just a couple of weeks ago, United had already enraged everybody by kicking two girls off a plane for wearing leggings.)

The other airlines would do well to take note and correct their ways. But of course, they won't. Has any industry worked as hard or as arrogantly—even as it's spent billions on advertising—to damage its own standing in the eyes of the consumer?

The problem is not only United but all the commercial carriers. We all have stories about getting mistreated at the hands of some officious gate agent or flight attendant—probably in the past week alone. (And forget about the clowns who constitute the dreaded TSA.) Aside from the occasional early-morning fragile package handling of a badge-wielding, government-employed "security" moron, we have all routinely suffered as the airlines have overbooked us and packed us into airplanes like so many sardines and talked to us like we're children. It was bound to happen. Post-9/11, a record number of U.S. citizens are flying—to the tune of a mind-boggling 1.73 million each day, according to the Bureau of Transportation Statistics.

Ah, the wonderful world of deregulation. We all know when air travel truly started sucking—back in 1978, when President Carter signed the Airline Deregulation Act, which effectively gave the airlines carte blanche. Soon, grand old carriers like Pan Am and Eastern bit the dust, while the way was paved for the likes of ValiumJet (er, ValuJet), the now-defunct discount airline that in the 90s infamously sent a few hundred passengers plummeting into the gator-infested Everglades after it mishandled cargo and set a plane on fire. Oh, well—a small price to pay for a $49 plane ticket I guess.

The public has paid and continues to pay the price of deregulation—but one group that's greatly benefitted from it are those who make ads for a living. More unfettered carriers means more fliers and more competition and more fare wars, all of which means more marketing. United, American, Southwest, JetBlue, Delta—all spend multimillions of dollars every single year on ad campaigns aimed at convincing you how different they are and how you should entrust them with your travel needs.

The only problem with this is, the public has actually flown, and enough at this point to know that these ads are short on anything resembling the actual customer experience and long on bullshit.

Some airlines don't even seem to be trying anymore—take American's infamous campaign last year, which seemed to blame you, the customer, for that awful flying experience. American was rightly ridiculed for that ad—but hey, at least give them credit for not attempting to paint air travel as a glamorous experience. If chances are you'll be seated beside someone wearing flip-flops and scarfing down chicken wings, it's not glamorous.

On occasion, airline ads can still be creative—those for foreign carriers anyway. There was Royal Jordanian Airlines' clever tweak of Trump prior to the election: 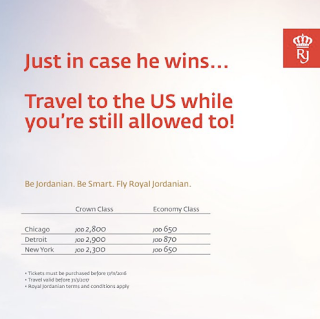 And after his Muslim travel ban blew up: 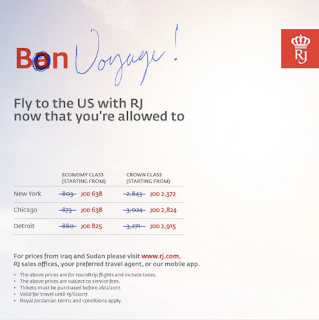 Earlier, there was this one for Norwegian Airlines right after Brad and Angelina split: 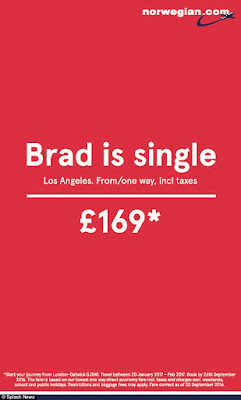 Back here in good old Murica, meanwhile, the United story will eventually fade from the headlines and our collective memory, and the airlines will keep on telling you how wonderful they are, and playing us, the flying public, for a bunch of dupes. But neither advertising nor brand marketers insulting the intelligence of their customers are the issue—the lack of governmental control over an industry on which so many citizens have come to rely is. That's not likely to change with a president who is the greatest advocate of deregulation in the history of the republic now holding the keys to the 737.
at April 10, 2017