Gladiators, Crucifixions, the Ice Capades and Tyler Oakley: Why LIVE Is Still Where It's At 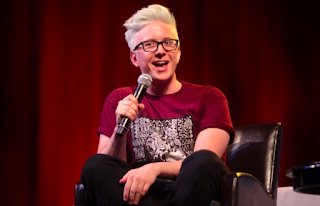 It's hardly a stretch to imagine that YouTubers like Tyler Oakley and Lilly Singh, with their multimillions of devoted groupies online, would also be a massive draw live.

But Mike Mills thought of it and you didn't.

And now, the 40-year-old guy from upstate New York who once ran a magic store and whose big break came when he bet that the sketch comedy series Who's Line Is It Anyway? would translate to the stage—ultimately generating more than 500 shows and $30 million in revenue—has become the king of cross-media programming, working with social media stars and TV celebs like Dog Whisperer's Cesar Milan and Cake Boss's Buddy Valastro to transform their acts into live theater, as Forbes reports in a new profile of Mills.

We all know live is where it's at. Madonna's latest album was a notorious bomb, failing to produce even one charting single—a first in the 30-year-plus career of the pop tartare—and yet Billboard named her Woman of the Year for 2016. Why? Because even though her music sucks and her music sales suck harder, her Rebel Heart tour sold more than 1 million tickets worldwide, generating $170 million and cementing her standing as rock's most profitable live performer and her partner Live Nation's own personal ATM. As PricewaterhouseCoopers noted in its annual report on entertainment and media industry trends, "Touring and festivals are now the lifeblood of the music industry."

It's not just music, as Mike Mills understands so well. Comedian Kathy Griffin could make a perfectly comfortable living doing her top-rated TV specials and writing best-selling books—but she's hitting 50 cities this year, and selling out damn near every one of them. Meanwhile, traditional and digital media companies from Pandora to Vanity Fair, Fast Company to CNBC are expanding their events footprint.

Some were way ahead of the curve—like Food & Wine magazine, whose Food & Wine Classic in Aspen (which I reported on while gorging myself about town last summer) has been bringing foodies together for three decades. And brand marketers like Kitchen-Aid, Lexus, Patron Spirits and Celebrity Cruises are now lining up to get out in front of all those fans.

Ain't it fascinating that with all our eyeballs glued to mobile screens and society's generally antisocial leanings, getting thousands of people together in one space for shared joy—an experience as old as the gladiators, crucifixions and the Ice Capades—has become so trendy, and enormously bankable.

As Mills told Forbes: "What you see on a screen will never compete with seeing someone perform live. When kids see someone onstage, it's like magic."
at April 19, 2017