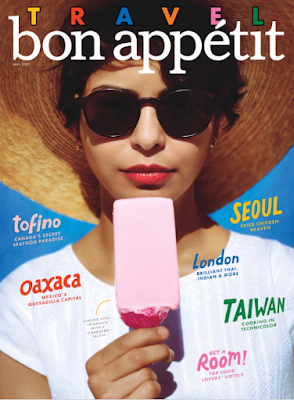 So, the cover of the new Bon Appétit was shot on an iPhone. Yeah, that was completely new and different—when Billboard and Condé Nast Traveler did it. It's not that it's a bad picture, and I realize publishers need to do all they can to generate buzz and make magazines cool, but not only is this idea not novel or creative, it also happens to be terrible for the business of magazines. Why would you embrace something that's anathema to your very being? As Bon App's creative director explained: "We wanted to create something our readers could relate to. This is technology completely changing how the publishing and design industries are moving forward." Well, that's a depressing thought for those of us whose life's work is creating content that strives to be more special than what you'd find on a 14-year-old's Instagram feed. Really, this idea that something great can be done not just by talented, experienced professionals with the right training and equipment but by any random person with a phone and a social media account? (The current occupant of the White House comes to mind.) Yes, I understand this was just a "gimmick" and that the picture, while taken with an iPhone, was also done by professionals. But it's the principle. One of the things that print (or at least those magazines that still understand what their strengths are and execute on them) has going for it are the highest quality photographs, produced by phenomenally talented photographers, wardrobe and prop stylists, set decorators, lighting people, makeup artists, retouchers, photo editors, art directors and creative directors, many of whom I have been fortunate to work with over the years. Working with them and watching them do what they do so well has given me tremendous respect for them—and made me appreciate how exceptional their talents are, and how indispensable those talents are to the media ecosystem. It takes a small village and a lot of coin to make a great (and sometimes, a really terrible) photo. Maybe it's not such a surprise that magazines are using pictures taken with a phone when one considers how generally awful looking so many of them have become. Anybody who's read or advertised in a magazine lately can see that certain publishers are aggressively shaving expenses by way of cheaper paper stock, trim sizes that give them all the stature of a pamphlet, and dramatically scaled back photo shoots, which, admittedly, are not an inconsequential investment. It's just that, as a lover of print, I think they need to continue to be an investment. If you're going to do something, do it right, as the old line goes, and if you're going to publish a magazine, then do whatever you must to produce a good magazine or just give it up and start trading Bitcoin or go into pharmaceutical marketing or something. With some exceptions—like Time Inc.'s People, which slashed its cover price by a buck last fall to stop gushing newsstand sales—publishers have discovered that readers will actually pay more if you keep putting out a product that makes it worth the money (note that Condé now charges a steep $8.99 for a copy of The New Yorker—a magazine that, incidentally, has virtually no photos), while nothing will keep the public and advertisers away like gutting yourself in some vain quest for profitability. One more thing: What may be even worse than cheap visuals are the magazines that still pay for ambitious shoots—like a recent issue of Time Inc.'s Entertainment Weekly that featured Amy Schumer and Goldie Hawn in fun set-ups on the cover and inside spread—but then slap those pictures on paper so appallingly thin and cheap that they needn't have even bothered. (They're called "glossies" for a reason, Mr. Battista.) I realize publishers are running a business that is in decline—but giving consumers and advertisers a substandard product can only hasten the descent. To paraphrase a certain someone near and dear to us all: MAKE MAGAZINES GREAT AGAIN!!
at April 20, 2017