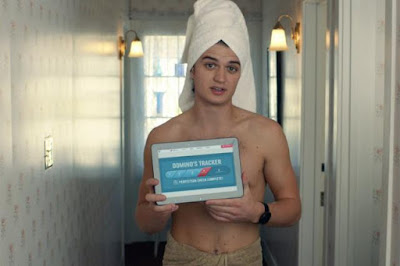 Past meets present to terrific effect in this Domino's homage to 80s classic Ferris Bueller's Day Off. Joe Keery, who plays Steve Harrington on Netflix's 80s-set hit Stranger Things, takes on the role Matthew Broderick made famous in this shot-by-shot redo from agency CP+B, which mixes nostalgia (including Yello's electropop hit "Oh Yeah" from the movie's soundtrack) with today's tech—in this case, the Domino's Pizza Tracker. Paramount Pictures let the pizza chain meticulously recreate scenes from John Hughes's famous flick in two different promos, as Ad Age reports, as long as it kept to one rule: It could not say the name "Ferris Bueller." Though it hardly had to for those of us who grew up in the 80s. Anybody from that decade knows and loves this movie—and for them, this ad will be an instant hit.
at March 20, 2017