Whether Trump Wins or Loses, We're All Lost 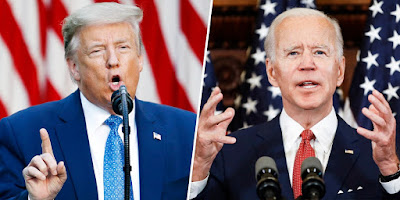 Raise your hand if you'd like to read another opinion piece about the 2020 presidential election. Anybody? Thought so. At this point, surely just about everything's been said and written that can be, and just about everybody, from both sides or neither side, seems prepared for a win, loss or, yes, even a draw. (One thing we all have in common: We'll all be glad when it's flipping done.)
I don't cover politics, therefore I feel under no pressure to strain and persuade you that I am that nonexistent thing: free of bias. Nor do I even feel obligated to come off as fair or balanced. Such a quaint journalistic notion as trying to report without smirking, shaking one's head in disbelief or schadenfreude most definitely went the way of the blue dress, the housing bubble, the ascent of Pravda II: Fox News (which famously, laughingly appropriated the once-noble and meaningful standard of the newsman and newswoman, "Fair and Balanced," as its brand slogan, making it forever unusable again among actual journalists) and, finally, the entire presidency of one Donald J. Trump: noted real estate con man, philanderer, TV star, proud member of the heretofore little-known Orange race, marathon tweeter of late-night grievances.

So what in the heavens have I got to say? Just this. Whether Trump wins or loses next Tuesday, I've a feeling we will all continue to be lost — not as individuals, perhaps, but as a country. If he wins, well, that outcome certainly speaks for itself. But if he loses, it means that anywhere from one-third to forty-something percent of Americans still love him, still approve of him, still want him, after all he's done, to be in charge of Brand USA. Others have made that point, and still more will continue to make it. Because it's the true takeaway, and as such, it bears repeating, and repeating.

Even in the case of a Biden win, a considerable chunk of the electorate, regardless of the election's results, will still think that entertainment and outrageous statements and coddling dictators and flipping off the military and pissing on rather than holding up the least among us (you know, like that dude Jesus who so many of Trump's followers claim to also worship taught mankind back in the day) are more acceptable and qualifying in a leader than brains, sober judgment, a steady hand and what used to be known as common human decency.

We are a country populated by a frightening number of people who prefer a reality show clown posing as president versus an actual, capable, reliable leader. Again, many have made the point; again, it's impossible to repeat it too much. It is, frankly, still shocking to imagine, even after four years in which you'd think we'd all have become inured.

I have been a New Yorker for three decades, but lately I've been reading about the South, where I grew up, and my home state of Tennessee's shameful role in that dark blip in U.S. history known as the Civil War. (That Tennessee happened to be the last state to join the Confederacy, something many of its residents are fond of pointing out, does make it one whit less culpable, any less on the wrong side of history, or any less damned.) It may seem like ancient times, but the truth is, it really wasn't all that long ago, and what I have come to realize, as so many of you have, is that "we the people" haven't really changed that much over the last 150 years. During Civil War times, there were proud racists (there still are — just check out Fox News's prime-time lineup) and rabid secessionists (ditto — have you visited one of those gated communities full of tacky McMansions on a golf course lately? United Colors of Benetton they're not), but for the most part there were just sleepy little sheep: uninformed, uneducated, unmotivated, simply going along, drifting toward the gaping maw of oblivion (sound familiar?).

Next week, the citizenry has a shot at turning away from ugliness and restoring our status as that fabled "shining beacon" of the world.

And if it doesn't?

Well, I reckon we had a good run, and we will thus retain our status, for four more years, as the world's most infuriating, tiresome and totally implausible reality show. I just hate to think what the finale will be.