In a characteristically slick presentation to advertisers yesterday, Facebook highlighted campaigns by Delta Air Lines and Calvin Klein that have run during the pandemic. What it didn't mention, as the Times reports, was that the very same day three brands — Ben & Jerry's, Eddie Bauer and Magnolia Pictures — joined a small but growing army of advertisers committing to a monthlong boycott of the platform in July over its questionable content-moderation practices, essentially pitting the odd trinity of patriotism, capitalism and common human decency against the soulless media monster that has steadfastly defended its dubious principles regarding what it vomits out every day (at least when what it vomits out happens to come from deep-pocketed advertisers, notably politicians).

Ben & Jerry's — a brand well known for standing up for what it believes in, long before and even since its acquisition by global consumer packaged goods giant Unilever — did not mince words in coming for Facebook, urging it "to take stronger action to stop its platforms from being used to divide our nation, suppress voters, foment and fan the flames of racism and violence, and undermine our democracy."

Facebook and its odious, androidlike overlord Mark Zuckerberg have become a popular target for their strange defense of President Trump's offensive and divisive content — with not only powerful advertisers taking a stand but also Facebook's usually loyal-sheep employees, who broke out of their virtual veal pens to stage a virtual walkout this month.

For years, I have taken on social media brands for allowing Trump to use their platforms to spew his hate — content that would get any of us common citizens banned at once. I feel so strongly about it that, at the beginning of his presidential campaign, I took it upon myself to start a Change.org petition to get Trump kicked off Twitter because of his obvious violations of its terms of service. As you can see, that noble gesture was a raging success.

I support Ben & Jerry's and the other brands that are sticking it to Facebook — a move made all the more brave because, as America begins to reopen post-plague, advertisers can hardly afford to do anything to hurt their business. Meanwhile, Facebook is not hurting. As this chart from the website Visual Capitalist shows, social media has been affected the least of all media categories because of the pandemic, with business still projected to grow by nearly 10 percent for the year, compared to TV (down 10 percent), newspapers (down 20 percent) and in-cinema advertising (down 32 percent). 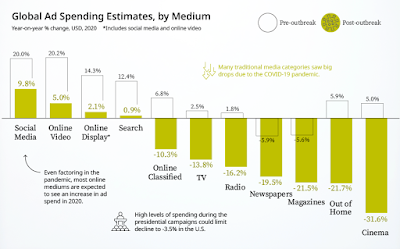 There are many reasons why the boycott likely won't affect Facebook at all. As Lucia Moses of Business Insider points out, "North Face and its ilk are rivals, so there was competitive pressure to join in. The huge ad spenders have yet to join the boycott. And Facebook's $70 billion advertising business mostly comes from small businesses that can ill afford to quit Facebook."

And yet, brand marketers continue to come aboard. Aside from the advertisers taking a stand, I also admire those ad industry leaders who've had the guts to throw their support behind the boycott — among them, Barry Lowenthal of The Media Kitchen, who told AdExchanger that it "is about more than just brand safety. It's about protecting our democracy."

Still, you'll forgive me for wondering whether any of this will make the social media garbage peddlers change their morally bankrupt ways.

But like any revolution, you gotta start somewhere.
at June 24, 2020