'Absolutely NO Burgers!!' Where's the Beef at Wendy's? 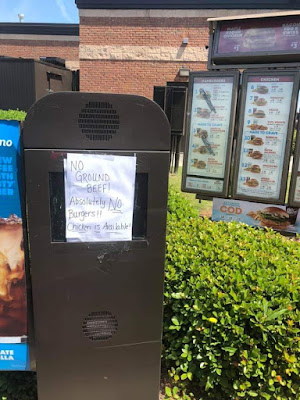 With all the marketing throwbacks lately, perhaps it would be fitting for Wendy's to resurrect "Where's the Beef?" That's what one dude suggested on Twitter, sharing a snapshot (above) taken at a Wendy's that had run out of hamburgers — only to have reporters from The New York Times and NBC hit him up for permission to use the photo (which wasn't his, as it turned out, but, rather, was a pic he'd taken from a friend's social media feed). "Some of our menu items may be temporarily limited at some restaurants in the current environment," said Wendy's, which suffered the shortage at the same time it was launching a gift card giveaway on Twitter, as Ad Age reported. What's been lost in much of the coverage of Wendy's running out of meat — and which was absent from even its own corporate statement — is the fact that it is one of the few burger chains to use fresh rather than frozen meat. Seems to me touting the fact that it uses fresh meat would make for a better marketing play than another uninspired contest on social media. Meanwhile, never fear, fast food fans: Word on the street is that McDonald's still has plenty of frozen hockey pucks.
at May 06, 2020