Coronavirus, Content and Companies That Need a Course in Corporate Responsibility 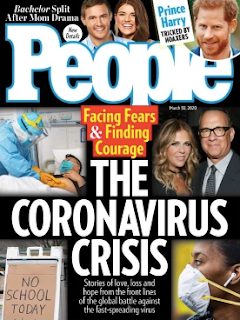 With us media types (like everybody else) stuck working from home for the time being — or as I call it the other 24/7/365, working — I can't help but notice how many of us are resorting to that which we so often do when there's too little actual news to report: writing about ourselves. A number of journalists, including me, have stayed busy chronicling what other journalists are doing to produce and disseminate content against challenging odds, and just generally patting ourselves on the back for being "wartime reporters" — even though 99% of us haven't left the house except to walk the dog or buy more Fritos and gin. One of the most exhaustive such accounts comes by way of WWD, which details how People — the country's largest magazine in terms of circulation and, at almost 50 years old, the granddaddy of celebrity journalism — managed to crank out an issue with virtually everybody working from the kitchen table in their pajamas. As EIC Dan Wakeford notes, "We're much more proficient on Zoom, WebEx, FaceTime and Slack calls." Aren't we all, Dan, aren't we all.

On the topic of newfangled communication tools, though some people find them in poor taste, there are plenty of very funny memes floating around regarding this pandemic and our all working from home, while #WorkingFromHome continues to be a trending topic on Twitter. Here's the best one I've seen, perfectly summing up the predicament we're in: 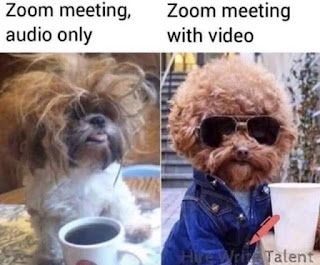 As far as the content that's being produced by all those journalists is concerned, you've probably noticed that much of what's out there is light on actual information and heavy on those favorite old standbys at times such as these: speculation, sensationalism and scare tactics. If ever there were a time to stop indulging in the (admittedly highly snackable) feed of the Daily Mail and turn OFF those blaring, blustering cable news channels, it would be during this pandemic — though, totally unsurprisingly, the exact opposite is happening, with ratings for CNN, MSNBC and Fox News through the roof, as Forbes reports. And then there are those content purveyors like AARP, which, instead of trying to terrify older Americans and the rest of us, is putting out stuff that actually does the reader some good, like this helpful, common sense and science-based piece on how we can work to boost our immune systems. It's just one example of what makes AARP a truly kick-ass brand and a reliably solid source of information.

On the topic of brands doing good, those of us who write about business and brand marketing in particular have made note of the many companies working overtime to help out in this crisis. Like Tito's vodka, which announced this past weekend that it was going to start producing the life-saving hand sanitizer that is in such short supply. Meanwhile, 3M has picked up the production of respirators and Zara's parent company is distributing face masks to healthcare professionals. On the flipside, there are, as ever, those brands that can't seem to get out of their own way (or maybe take their heads out of something?), ones that appear to be following the same playbook as that Starbucks store that charged hundreds of dollars for cases of bottled water at Ground Zero when there were still pulverized remains of human flesh permeating the air of lower Manhattan, a stupid stunt that embarrassed the brand and for which corporate had to apologize. Among the businesses that could also use some pointers right now on how to not treat their customers like dirt? Well, there's United Airlines, Airbnb and Seamless, just to name three, as PR maven Drew Kerr points out. It's called corporate responsibility (or, just being a forthright, respectable business) — look into it.

Meanwhile, as the Journal reports, a number of brands are scrambling to pull or alter advertising content that once had seemed clever but that now can be filed under the "totally tacky and tasteless" category thanks to coronavirus. "Encouraging people to eat cheese dip with their fingers or suggesting they pull back from using social media in favor of bonding in crowded bars isn't the best guidance amid the coronavirus pandemic sweeping the globe," as Suzanne Vranica and Sahil Patel explain. On the other hand, maybe it's an opportunity for KFC to update that old brand messaging (something about fingers) toward doing some good in a newly germophobic world?
at March 23, 2020