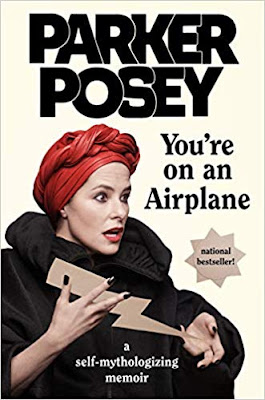 I was visiting my mom a while back when one of those singing competition shows came on the television. As we listened to some tone-deaf Whitney Houston wannabe's screeching, mother just winced and shook her head. "Everybody thinks they're a singer," she sighed.

I feel the same way about writing — everybody thinks they know how to do it, that their own personal histories or the random, amusing thoughts that pop into their feeble brains are worth sharing. Social media has, of course, made the situation so much worse, giving literally any nobody a platform. Andy Warhol had no idea how right he'd be — though those 15 minutes have dragged into an endless, merciless hell, a sellout shitshow that will play forever and ever. Narcissism is the social disease du jour, and Facebook is a box of Trojans riddled with pinpricks.

Which brings us to Parker Posey.

I've always enjoyed the work of this comic actress. Her offbeat supporting roles in movies and TV programs ranging from Waiting for Guffman and Best in Show to You've Got Mail and Will & Grace have earned her an enduring career in Hollywood and independent film and many adoring fans (of which I am one, or used to be). I had really looked forward to the publication a while back of her memoir, You're on an Airplane, so you can imagine my disappointment to find it an utterly ghastly affair: poorly written, excruciatingly dull, a rambling, incoherent mess and all-around one of the worst excuses I've come across for murdering a tree. (It says something when the cover art is the best thing about a book.) I keep my copy on a shelf where I can see it every day as a reminder to not fool myself into thinking that there's anything I can do. But I am considering relocating it to my car's glovebox, so the next time I'm around Posey's weekend hometown of Hudson, New York, which I also frequent, and happen to bump into her on the sidewalk or in one of the many hipster coffee joints up and down Warren Street, I can thrust this bloody abortion back into her hands and demand a refund of my 30 bucks. Or at least a latte.

Yes, there are many things you can learn from Parker Posey, but writing is not one of them. I'm in good company apparently, as these customer reviews on Amazon attest:

"I've always loved Parker Posey for her eccentricities as an actress and her genuine charisma. But she is not a writer. The book is disjointed and I found myself constantly looking to see how far in I was to determine how much longer I would need to spend in this purgatory. Take another flight."

"I love love love Parker Posey, but this book is unreadable."

"If you love Parker Posey and her movies, do not read. This book will make you hope you never sit next to her on a plane. Or in a restaurant. Or anywhere."

"I'm a huge PP fan. Great actress and artist. But most of what she writes about is thoroughly mundane and uninteresting and devoid of clever insights or anecdotes. Quirky only goes so far, certainly not 300 pages. I hate to say it, but I like her less after reading this book."

There is a lesson to be learned here, as with the baseball career of Michael Jordan, the paintings of George W. Bush or anything starring Madonna: stick with what you know, with what you're good at. You may be a fine used car salesman or teacher or bank teller or vegan chef or investment banker or streetwalker — but that dream you've always had of playing for the Knicks, of flying to Mars, of writing your life story? Do yourself and humankind a favor — strangle it in its sleep.