Nope, Vanity Fair Is Not Getting Any Better 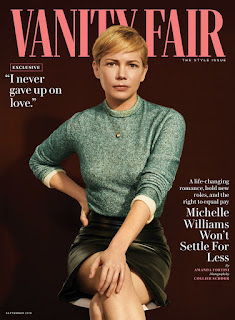 There once was a glorious, glamorous magazine that covered Hollywood and politicians and media titans and the royals and scandals and the lowdown and dirty better than anybody, and it was called Vanity Fair. Tina Brown resurrected it in the 80s, made it great, then handed it off in the 90s to Graydon Carter, who made it even greater. But then, with one penny-pinching, jaw-droppingly shortsighted move, the publisher, Condé Nast, in the direst position of any of the beleaguered magazine publishing giants, seemed intent on destroying it all. There was really only one choice to replace the retiring Graydon, of course, and that was Janice Min, who'd turned The Hollywood Reporter from a sad rag into a gleaming, glitzy affair—and took home National Magazine Awards for it. But someone with the chops of a Janice doesn't come cheap (she was pulling down seven figures at THR), and even though Condé's artistic director Anna Wintour is said to have (wisely) wanted her bad, bad, bad for VF, the bean counters, in cahoots with the eggheaded in one regard (politics) but apparently not so smart in other areas (business) David Remnick, tapped an unknown book editor with a razor-thin resume from The New York Times for a song—and on the subject of music, with several issues under her belt now, it's become clear to all of us watching and listening (and waiting, impatiently) that poor Radhika Jones can't carry a tune to save her life. VF under the underwhelming Radhika has no idea what it is, or what it wants to be, or apparently even what it once was till not so long ago. The covers have been edgy—and to a one, dreadful. The features are boring and irrelevant. The design is godawful. I can't imagine who this magazine is being produced for, or who'd bother reading it with all the other, so much better sources of information and entertainment out there. (The magazine's sad demise is even more poignant on the heels of Tina's terrific, rollicking reminiscence of her years at the helm, The Vanity Fair Diaries. Even the worst chapter of that book is infinitely more entertaining than anything you'll find in Radhika's VF.) Looks like Condé saved some admittedly much-needed cash (including not only Radhika's relatively wee salary, but all the heads her bosses continue to force her to chop) but in return may well have done in one of the few remaining strong heritage print brands around. It's not too late—they can quietly retire this young woman, leaving her to return to the brainy world of writing about books nobody will ever read or whatever she's presumably adept at, and get a real star of an editor in there, maybe Janice or maybe somebody else. But every passing month that they let this experiment drag on is another that VF loses cred and luster, and most urgently, once-loyal readers. The trend is not irreversible—yet. But not with this losing formula, dreamt up by an editor who's clearly in way over her head. Truly visionary and talented editors, though the owners of media companies may not think it, are an extremely rare thing. And as with anything in life, you get what you pay for.

ADDENDUM: As if all that weren't enough, now it appears the new VF is blurring the line between editorial and advertising on its very cover, reports the Times.
at July 26, 2018