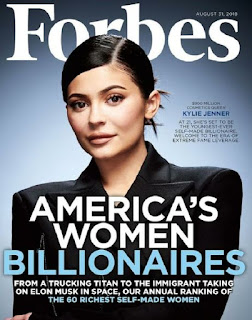 I feel like I've aged 10 years in the day since I learned Kylie Jenner made the cover of Forbes, she having made its list of the richest self-made women. Much has already been made of the hilarity of the magazine dubbing Kylie as "self-made," considering the famous, wealthy family from which she was spawned. And let's not even get into the fact that her "empire" is built on lipstick that purportedly gives you pouty lips — conveniently ignoring the fact that, as anyone can tell from photos of Kylie as a kid versus now, she obviously had surgical enhancements to pump up her pie hole. (A lot of things on my person have grown as I have ticked off days — ears, bunions, and those wispy little gray hairs sprouting from my eyebrows spring to mind — but I assure you my lips are not one of them.) As it turns out, I have a bit of history with this little twerp posing as a grown-up businesswoman. I once ran features for a magazine that negotiated with Kylie's reps to put her on the cover. Her business had already started to take off, and this was to be her first ever cover of a business publication. Then the hell started. First she stood up our reporter, repeatedly, after having agreed to a sit-down interview. Then after our having secured for the photo shoot an expensive studio out in L.A. for the better part of a day, plus a photographer, stylist, makeup artist, hair person and even caterer of Kylie's choosing, she decided after a couple of snaps that she just wasn't feeling it and walked off. Her rep pleaded with us to reschedule for another time. We explained that, having flown 3,000 miles and gone to considerable planning and expense to make this happen, that wasn't likely. (I seem to remember our having sunk more than $10,000 in the failed shoot. That might not be a lot of money for Forbes or Vanity Fair, but it certainly was a lot for our little pub to flush.) Mind you, all her shenanigans were blessed and fully aided by her P.R. handlers, who seemed to have absolutely zero control over the little diva and throughout the process took obvious delight in torturing us on behalf of their snot-nosed client. (I have no clue if they're still repping her, nor do I care. As I understood at the time, that family has blown through, so to speak, a series of kneepad-donning lackeys, so I wouldn't be surprised if these particular enablers were also 86'd.) What a contrast that experience was from one we had with her sister Kim Kardashian, who we'd shot for our cover a couple of years earlier and who couldn't have been a nicer, more professional subject to work with, showing up on time for her shoot, meeting with our reporter as planned, and staying present and engaged through the whole affair. Not that it'll hurt Kylie one bit (she can dry her tears with hundred dollar bills, as they say), but I must admit to taking a wee bit of satisfaction in the backlash that has greeted this absurd Forbes cover. After many years of dealing with celebrity subjects — even notoriously difficult ones like Martha Stewart — I never encountered such a headache as I did with this one, before or since. Now I'm going to check to see how much bigger my eye bags have grown overnight while Kylie counted her money.
at July 12, 2018