R.I.P. Interview (Even Though You've Been a Cold, Lifeless Corpse for a Very Long Time) 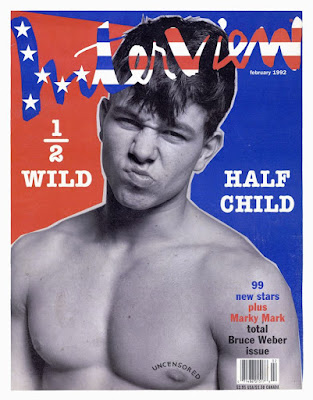 Everybody bemoaned the seemingly sudden shuttering this week of Interview — Andy Warhol's iconic and onetime influential chronicler of actors, models, rock stars, artists, writers, politicians and others who compose impolite society — following years of financial woes, alleged depravity in the ranks and, the absolute worst thing that can happen to you if you're in the business of purveying content, nonexistent readers, advertisers or buzz. But let's face it — Interview died a long, long time ago. I for one would prefer to remember it as it once was: my gateway, as a fish-out-of-water teenager in Tennessee, to a world of 80s-era New York art, culture, and debauchery. I even had framed covers of the magazine, with their striking, technicolor drawings of the most important people of the day, lining the walls of my apartment in college. (A few covers that come immediately to mind: a mesmerizing, luminous Grace Jones, a gravity-defying Dolly Parton by Robert Risko, and an uncomfortably jailbait-ish Marky Mark in his underwear, before he became Mark Wahlberg: Movie Star.) I remember experiencing Interview for the very first time when I was 14, at a now-defunct newsstand called Mosko's near the Vanderbilt campus. It's also the first place I ever saw the Sunday New York Times, newspapers printed in other languages, and art and nudie magazines. (I believe this all-important way station in my development is now a Subway sandwich shop. At least Obie's Pizza and the Elliston Place Soda Shop have survived the gentrification bulldozer.) To say flipping through the pages of Interview for the first time was a seminal moment in my history is downplaying things — I'd never come across anything like this, had never read about people and places or seen images like this, and had certainly never read writing like this. As a wannabe writer, the magazine served as my entree to and tutorial in Q&A-style journalism — and Interview did the very best of it there ever was thanks to a long line of editors and writers that includes Bob Colacello, Ingrid Sichy and Kevin Sessums. Q&As get a bad rap — a lot of people think they are the cheapest and easiest thing to produce when in reality, when done at their most expert, they can be the most intimate and revealing form of reporting. But aside from all that, and probably most significantly, the magazine was my introduction to a lady who would shape my writing style, fuel my youthful fantasies about New York City and cement my cockeyed view of the world — I refer, of course, to the one and only Fran Lebowitz. (In Martin Scorcese's documentary about Fran from a few years back, she recalls going down to the Factory in 1969, the year Interview was started, to talk Andy into hiring her to write for it. When she knocked on the door, the voice on the other side — belonging to Andy — asked, "Who is it?" Fran shot back: "Valerie Solanas!" Andy opened the door.) Like you, I haven't read Interview in years. It had become boring and pointless, one more irrelevant, heritage media brand running on the fumes of its former glory and competing with way too much other, more vital content. But I will always remember it, and revere it, for helping make me, me.
at May 27, 2018