Gentlemen, Burn Your Blue Blazers and Neckties: An Ode to Working From Home 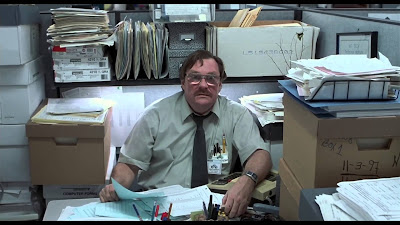 The Times has some pointers for those of us who work from home — including setting alarms to remind ourselves of certain tasks we need to get to. Personally, if I had bells going off all times of the day, I'd have to check myself into a loony bin. It seems to me that if you have a work ethic and a measure of self-discipline, it ought to make no difference whether you work in a cubicle surrounded by other drones or at Starbucks or on the wing of a 757 — or in your own home. And it doesn't much matter, despite advice to the contrary, whether or not you have a devoted workspace in your domain. I've had deadlines that got met just as timely and efficiently from the kitchen countertop next to a boiling chicken as they did the quiet second bedroom I call an office. That said, there are clearly those personalities that require the structure, procedure and camaraderie that come with office jobs. I am definitely not one of those people. During my years as a working journalist, I have been my own boss from time to time, and while it's not for everybody, I have always found it to be a productive, creative and largely happy predicament. Meanwhile, the same does not apply to all the 9-5 jobs I have had in between. (My ambivalence about my fellow man, rubbing elbows with him and breathing his second-hand air is well documented.) As a freelance person, there is tremendous satisfaction in setting your own hours, wearing t-shirts and flip-flops all day (I've saved a small fortune in dry cleaning), and being free to say yes to working for certain people and no to others. I for one don't miss languishing in pointless, unproductive staff meetings where I'm forced to pretend an unctuous CEO's stream-of-conscience blather and steaming pile of corporate-speak amount to pearls of wisdom. In office life, as in life in general, so much time is wasted listening to other people who like to hear themselves talk but say nothing. Ah, bosses. One particularly awful one even had his charges (including me) take personality tests to determine whether they were compatible with him and were, in fact, "company material." You know, there was once another group that exercised strict rules determining whether people were in or were out based on certain identifiable and perceived inferior characteristics: the Nazis. Now, there's only one person my personality has to suit: me. And I don't even own a pair of jackboots. I think I shall keep it that way. As for this week, you can find me out in my garden finishing another deadline. If it ever stops raining.
at May 19, 2018