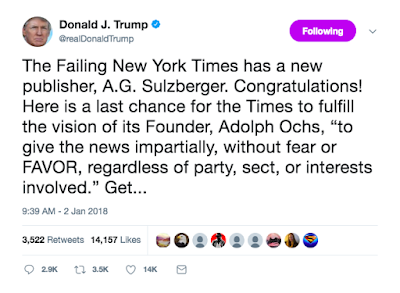 A couple of points: Firstly, as has been pointed out numerous times by many sources and despite the president's persistent fantasies, the Times is far from "failing." As Business Insider reported last month, the paper now has 130 million monthly readers and 3.5 million paid subscribers—more than double its digital subscriptions two years ago. Also, as MSNBC producer Kyle Griffin pointed out on Twitter this morning in response to Trump's tweet, if the Times is failing so hard then why, Mr. President, do you continue to do interviews with it?
at January 02, 2018