LA Times Publisher Gets Called Out by NPR 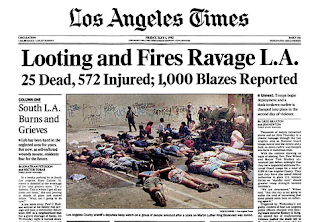 A most distressing story today from NPR about my former boss Ross Levinsohn—currently the publisher of The Los Angeles Times—and an alleged history of sexual misconduct and what's being called "frat house behavior" at companies he's worked for. In the handful of months (just under a year, as I recall) he held the reins of the company that published The Hollywood Reporter, Billboard and my old magazine, Adweek, all I can say is, I never witnessed such behavior. Of course, that's not saying much—I never witnessed him much, period. The company was in New York but Ross lives in LA, and as one of the senior most editors of one of the media properties he oversaw, I think I laid eyes on him two, maybe three times tops—usually when there were a red carpet and paparazzi involved. In fact, I remember one glitzy event where I snapped a picture with my own iPhone of Ross with a couple of our colleagues, along with our guest of honor Russell Simmons—a powerful man who's been the subject of some unfortunate headlines himself lately. As for Ross, he was one of a number of CEOs the company ran through in a few short years, before my magazine was spun off and eventually sold off to a group of foreign investors. Within a couple of hours of NPR breaking this story, it got picked up by sites like The Cut, Mediaite and the LA Business Journal, while The Daily Beast reported that the Times's guild called on Ross to be fired. But by 5 p.m. New York time, I'd yet to find anything about any of this on the Times's own homepage. Still, the Times itself has now become part of the news cycle, one in a long list of news organizations—including Fox, NBC, CBS and Vice—caught up in a seemingly bottomless mess of sexual misconduct scandals. And you thought Hollywood and Washington were of morally dubious character. If Caligula, Mussolini and Charles Manson were alive today, they'd probably run a media company.
at January 18, 2018