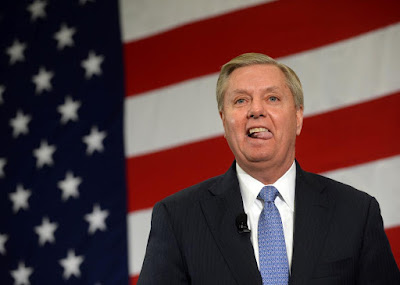 The Daily Mail's story about Juanita Broaddrick taking to Twitter to slam Oprah Winfrey for her passionate, headline-making speech at the Golden Globes contained an unfortunate typo referencing Sen. Lindsey Graham. The website noted that MSNBC host Joe Scarborough told viewers of his show this morning that some Democrats had confided to him that they believe Broaddrick's allegation, then added:

We think they meant Sen. Lindsey Graham. (There's the screen grab, lest the evidence be lost once someone at the Daily Mail gets around to fixing the faux pas.) The sexuality of the unmarried South Carolina Republican has been speculated about for years, should it have escaped your attention. Was the Daily Mail's oopsie a subliminal and totally innocent yet nonetheless homophobic slip on the part of some writer or editor? Or perhaps a more sinister, not-so-subtle dig at Graham? Or maybe (and most likely), it was simply another case of "ducking spell check" run amok.
at January 09, 2018