Forbes Magazine Ranks the Highest-Paid Entertainers — aka, "An Enemies List" 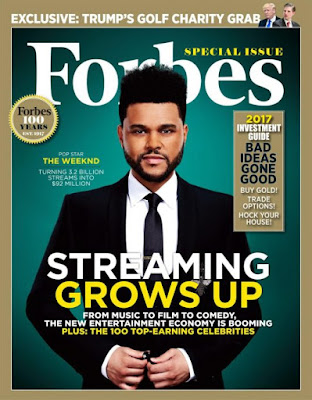 I've done my share of magazine profiles on celebrities and otherwise brushed up against a few boldface names in my time, and Forbes's list of the highest-paid entertainers features a handful of so-called personalities who bring back personal memories — some fond, some bad, and one in particular I am about as wistful for as that unfortunate tummy issue I once experienced in the Cartagena airport toilets.

Which seemingly nice but actually quite awful, very rich and popular celeb says "no" to absolutely everything — every magazine cover, every magazine profile, every top-10 list, every event, everything — she is invited to be part of, even if promised everything short of being called god in print?

Which leading man once graced underwear ads but who in person turned out to look like a homeless person, and a short one?

Which pop star came by the house for Thanksgiving, pre-fame, and was so apparently stoned that the rest of my guests and I were forced to listen very hard to understand anything the person was saying over the course of an entire evening?

Which overexposed beauty seems like she'd be a diva but is actually one of the nicest and most professional people you'd ever hope to work with?

On the other hand, which dubious "celebrity" turned out to be an absolute terror, ultimately walking off a very expensive photo shoot because of not "feeling it," resulting in weeks of negotiations and ultimately the whole thing getting scrapped and costing my employer a small fortune?

Which movie star's publicist lobbied hard for a magazine cover for her client — then proceeded to be so difficult negotiating the simplest of terms that we pulled the plug, sending said publicist first into fits, then threats before launching a full-blown, ultimately unsuccessful campaign of begging and pleading?

Which sexy star, despite our most earnest appeals, would not consent to a photo shoot (even though she'd be lucky to be the subject of any magazine profile) — so we ended up getting her back by writing about her anyway and Photoshopping her head onto a model's body?

Which queen of her own entertainment empire/idol of mine confessed to me that she is an insomniac who gets almost no sleep and begins each day by around 4 a.m.?

Which singer did I always hate but got to see perform during a small, invitation-only show at last year's Cannes festival — and ended up so wowing me that I became a megafan in an instant?
at June 12, 2017