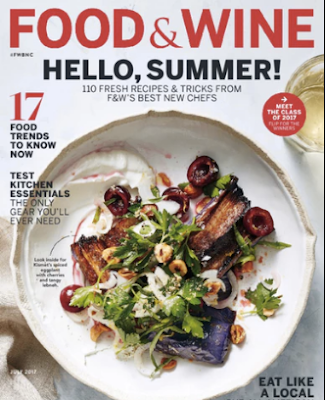 Time Inc. has announced it is moving Food & Wine's operations from New York to Birmingham, Alabama. The magazine's leadership stressed in media reports that this is really no big deal, since foodie culture exists everywhere — including, coincidentally, in places where it costs a fraction to run a media company (or any business) versus Manhattan. Hunter Lewis — the editor of Cooking Light who now takes over Food & Wine since its awesome and highly respected editor, Nilou Motamed, refused to relocate — told the Times: "You can create and do business in food anywhere now." Meanwhile, Forbes proclaimed that the move is "more proof that the South now rules American dining," noting that Birmingham has joined the likes of New Orleans, Atlanta and Nashville as one of the South's "food cities." I do not argue those points, nor do I fault the financially struggling Time Inc. with doing whatever it can to salvage its business. Still, this development is further, somewhat sad evidence of the end of New York as the media and cultural capital of the country. Honestly, I wouldn't be surprised if Time Inc. eventually moves virtually all its operations to Alabama — or if other publishers follow suit bolting the city. It simply costs too much to run a legacy media business out of New York, even with whatever generous tax breaks the state and city are giving these companies to stick around — which is why places like Birmingham, Charleston, Knoxville and Jersey City have become mini media capitals. In a way, this trend is a reassuring thing — in a modern world, we can do virtually any kind of business from anywhere, of course, notably from places where the cost of living is not nearly as crushing as it is in New York, and where the overall quality of life is arguably better as well. Not to mention where the tax burden is less onerous. Alabama collects only a nominal income tax on its residents, while other places — including Texas, Florida, Washington and Tennessee — have no state income tax at all. Meanwhile, if you live and work in New York, you have to pay income tax not only to New York State but also to the city — hardly a formula for attracting and retaining people who don't happen to be millionaires. Of course, if you happen to live outside New York in this digital era, you get the same Netflix and HBO shows as people who live in the city, you can get the same stuff shipped to you overnight from Amazon, you can watch Pornhub, you can take an Uber home, you can stay in a boutique hotel, you can shop at Trader Joe's and Whole Foods, you can eat awesome, locally sourced food at cool restaurants, and you can produce a kick-ass magazine or website — all without going bankrupt. Still, there is, again, something quite unfortunate about it all, at least for those of us who cling to nostalgia. (Some of us still are not over Time Inc. moving out of the iconic Time-Life Building on Sixth Avenue in midtown.) I mean, sure, Birmingham might have a lot going for it, or L.A. or Atlanta or Miami or Jersey City — but that doesn't mean I want to see the Metropolitan Opera or the Whitney Museum move there. OK, so one magazine is moving out of the city — big deal. But with every institution that does that — and there's an alarming number of them — the city loses a little chunk of its soul. And that is definitely not a good thing for New York. Then again, sometimes media people leaving the city can be a good and welcome thing — take Rush Limbaugh, who years ago forsook New York for Florida, with its ample sunshine, favorable tax climate and virtually endless supply of cheap, trailer-park pharmaceuticals. And that, my friends, was a very good thing for New York and the people who love it.
at June 25, 2017