Welcome to Hudson Yards, a Dark, Hulking Icon of a Dystopian, Suburban Manhattan 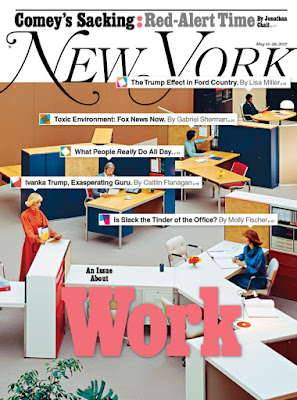 If this week's issue of New York seems a little thicker than usual, it's because it boasts that truly unusual thing nowadays, for any magazine but especially a weekly or biweekly—a big, fat gatefold cover followed by a multipage advertising promotion for the forthcoming atrocity that is Hudson Yards, the pointless, soulless development on the far, far west side that has made traversing Tenth Avenue a nightmare for drivers, automobile passengers, pedestrians and winos for the better part of the last five years and that promises, when completed, to have Manhattanites who don't live or work in far, far west midtown or far, far west Chelsea making the far, far schlepp over to shop at, eat at and otherwise experience what is basically an overblown, depressing suburban shopping mall—one that will also, as it happens, house the headquarters of corporations like Time Warner, L'Oréal and Coach, thus making it equally a depressing suburban office park. The insert features pithy quotes from the likes of David Chang ("We need to have bigger, bolder visions") and Thomas Keller ("Higher expectation is standard for us"), both among the restaurateurs and shop-keeps banking on the multigazillion-dollar reimagining of the Hudson riverfront. We've all known for some time now about well-heeled department store Neiman Marcus making its New York City debut there, but as the ad details, we can look forward to outposts from other exciting retailers as well. There's Banana Republic, The Body Shop, Kiehl's, Sephora and Zara, just to name a few—in other words, no brands so exotic as to be unknown to your garden-variety, mid-range American mini-mall. And speaking of things that are iconic-slash-suicide-inspiring, what would this new real estate destination be without an overwrought, miserable-looking architectural centerpiece? Here's a sneak peek, from the advertisement, of the multilevel balcony/staircase thingy that will dominate the main courtyard of Hudson Yards: 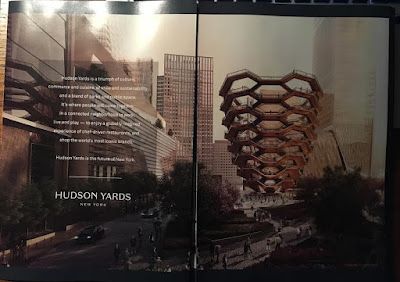 I'm thinking the inspiration was a honeycomb, mated with an alien ship, mashed up with a sort of DNA double helix and a dash of wig from Pricilla, Queen of the Desert. In other words, a hopeless mess that is not only yet another in the long, long line of exhibits supporting my sincere belief that all architects should be hanged but also a fitting focal point for such a monstrous pile of industrial awful.
at May 17, 2017