Never Wear Your Husband: The Times Demonstrates Why Punctuation Matters 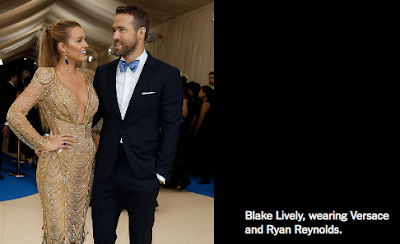 I felt somewhat bewildered going through the Times's Met Gala slideshow this morning. Who are these people? I kept asking myself. (The question What the fuck are they wearing? is, meanwhile, a given.) Except for Catherine Deneuve, Madonna, the hostess Anna Wintour herself and a couple of others, I caught myself wondering whether I was looking at A-listers from a fashion event or a bunch of juvenile delinquents who'd gotten into their mothers' makeup. The theme of the so-called Oscars of the East Coast this year was "edgy and asymmetrical." Which to me just seems to be an excuse to wear your pants without having them tailored. While the hottest runway models, actresses and musicians were natural choices for Anna's invitation list, others were a little more curious. Katie Holmes, really? Are we actually still pretending she's famous? Just check out her imperious, austere pose—I think she's played Jackie O so many times now that she thinks she is her. Then there are those obviously invited not so much for their pop culture or fashion cred but rather for their genetic provenance. Like Frances Cobain. The Southern expression "Bless her heart" springs to mind. Luckily, Nick Jonas showed up, which always makes everything, no matter how awful, somehow better, regardless of what he's wearing. Or even if he isn't wearing anything at all. Ever see photos of some big, fancy party and wish you'd been a part of it? In this case, it was more like thanking God you were nowhere near it. And as someone whose own sartorial choices run the gamut from J. Crew (high) to Fruit of the Loom (low), there was no shot of that happening anyway.
at May 02, 2017