'Hey, It's Not As Hot Down Here As I Had Expected!' Ailes, In Memoriam (Sort Of) 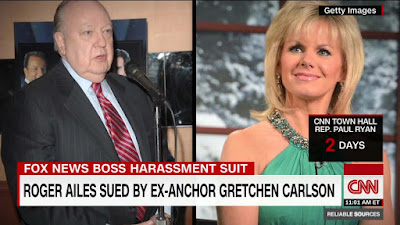 How to honor a man who built a television empire—even if he did it by exploiting the worst instincts and aggressively proud ignorance of everyday Americans? How to report straightforwardly on his impressive career achievements, without pointing out that his greatest creation paved the way for the current, awful inhabitant of the White House and the national disaster we now wake up to every morning? How does one take a moment, upon the news of his death, to pay homage to the man and his accomplishments—without writing about the fact that, despite his vision and ambition, he was privately a horrible monster who preyed on and abused the women he supervised and ended up being driven from his lofty perch? Back there somewhere, I was a magazine editor and once signed off on the choice of Ailes (they were always a group decision of the staff, these choices—I was but one voice) as "TV Executive of the Year"—about six months before details of his disgusting behavior were revealed. (Happily, an angel on my shoulder told me to stop short of putting him on the cover—something that was seriously discussed and considered.) Still, once the bombshell news of his horribleness broke, I argued for rescinding the award after the fact, which did not happen. (The reasoning was that it was his professional accomplishments that had been celebrated, not his personal life, a distinction I certainly appreciate. After all, if everyone in the media or ad business or any business—especially the people who run those businesses—who got a trophy had to give it back once details of their personal lives were exposed, there would be no awards. Yet, in the case of Ailes, my thinking was that what the guy was accused of and eventually lost his job over amounted to much more than an extramarital affair or borrowing the Girl Scout Cookie money from his kid's Hello Kitty purse.) So, how are media outlets treating the delicate balance this morning of singing Ailes' praises while reminding the public of his indiscretions and crimes? The Times' obit, unsurprisingly, has "ousted" as the fourth word, only to be followed in the same sentence by "pushed out." USA Today, likewise, mentions the dark side of Ailes in its lede. CNN makes no mention of Ailes' troubles till the sixth paragraph in. Predictably, the Fox News homepage sports a giant portrait of Ailes at the top, followed by a story that, just as predictably (since the network got publicly shamed and ended up many millions poorer for Ailes' behavior), makes no mention of the details of its godfather's troubled history, limited to the vague line, buried deep, that he'd left Fox in "a cloud of controversy" over allegations he "strongly denied." As usual, the pithiest, most searing commentary is offered via Twitter, where not only is #RogerAiles a trending topic but so is #RogerAilesIsDeadParty. Marc Lamont Hill, Temple University professor and BET and CNN personality, wrote: "Roger Ailes has died. Wow. Sending deep and heartfelt condolences to everyone who was abused, harassed, exploited, and unjustly fired by him." Jeet Heer, senior editor of The New Republic, offered that "Death demands a humane response. Our thoughts & prayers should be with the countless women Roger Ailes sexually assaulted and humiliated." But it is the tweet by "Diane N. Sevenay," the fictional Funny or Die character, that is most on the nose: 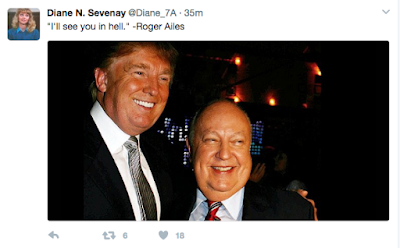