You Deserve a Vacation—LOTS of Vacation 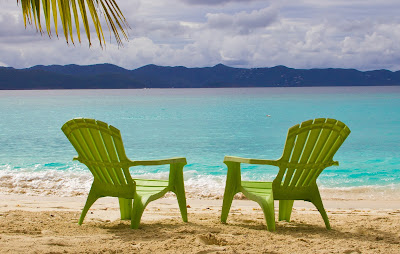 How many weeks of vacation do you get at your job? Two? Three? (And let's not even get into whether you actually take all the time off that's coming to you—or how much you feel compelled to check your email or hop on a conference call during that precious "leisure" time.)

Now, just imagine getting all the time off you need—with pay.

It's no fantasy—it's policy at a marketing company in Indiana.

Colin Receveur, founder and CEO of SmartBox Web Marketing in New Albany, just across the Ohio River from Louisville, Ky., says it's just smart business—two words we don't have the occasion to use together much lately. It certainly makes him among the most forward-thinking business leaders (again, "business" and "leader" concepts that are more or less polar opposites) and makes SmartBox a true oddity in this country, famous for squeezing every ounce of productivity (and as a result, spirit) out of its workers.

"We look at ourselves as a progressive company," explains the exec. "We have a lot of remote time for everybody who works here, and unlimited paid time off "just seemed like the next logical step."

While SmartBox is resolved to give its employees better lives, most of corporate America seems to be headed in the other direction.

More of us than ever are stressed out to the max because of our crappy jobs and brainless and/or boorish bosses and turning to drugs and alcohol, costing companies more than $500 billion a year. All the while, lawmakers are working furiously to strip us of our privacy protections. The vaunted (among cost-slashing employers anyway) "open workspace," where workers are shoved together like so many cars in a Manhattan parking garage, is a trend we have had about enough of. (Who would figure it doesn't promote productivity to have your coworker sneeze on you.) Meanwhile, we keep hearing about companies cutting insurance benefits, retirement contributions—and at the same time, demanding longer hours and more product from a thinner workforce. Is it really such a mystery why so many Americans are bailing from their oppressive corporate jobs?

Those who haven't parachuted out stand a growing chance of getting shoved. This month alone, General Electric, Boeing and Liberty Mutual are among the U.S. corporations to announce widespread furloughs. In the media world, ESPN, American Media, Univision and The Guardian are the latest lining up to lob off heads. And the retail sector, as we all know, is in freefall. JC Penney, Sears, Macy's, Abercrombie & Fitch and GameStop are a just few of the chains to announce this year that they're shutting hundreds of stores, tossing aside thousands of employees in the process.

(Think your company is not only a sinking ship but one that's on fire? Check out these 10 signs that it might be time to elbow your way onto that inflatable raft.)

No wonder the American worker is nervous as hell about his prospects—and our collective ones.

"This truly is the age of uncertainty," one noted economist said recently. No shit. Seriously, who among us doesn't fully expect the stock market to crash any day now? And who knows—maybe even a presidential impeachment along the way?