The Part of Kellyanne Conway Has Been Cast! 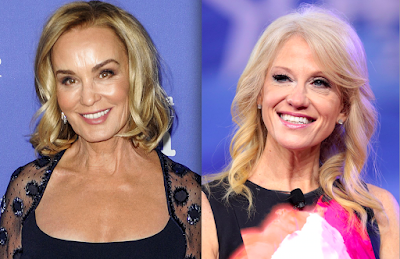 "I feud in my head with people. Like now, I'm carrying on a feud with Kellyanne Conway—in my head. The thing is, really, your agent calls: 'You've been offered this part. One of the most important women in government right now, she's counsel to the president, she's a spokesperson. And then you pick up the script and read it and think, they've got to be kidding! You've got a scene where they talk about 'alternative facts'? You've got a scene where you imagine that the microwave is turning into a camera? You go to the inauguration dressed as a nutcracker? You can just hear that conversation with the actor: 'Are you kidding me? Nobody's going to take this character seriously—she's a joke!' " -Jessica Lange, star of the FX miniseries Feud, on The Late Show With Stephen Colbert (Via Queerty)
at March 16, 2017